The Art of Hero Worship by Mia Kerick

Trembling on the floor, pressed beneath a row of seats in a dark theater, college freshman Jason Tripp listens to the terrifying sound of gunshots, as an unknown shooter moves methodically through the theater, randomly murdering men, women, and children attending a student performance of Hamlet. Junior Liam Norcross drapes his massive body on top of Jason, sheltering the younger man from the deathly hail of bullets, risking his life willingly, and maybe even eagerly.

As a result of the shared horror, an extraordinary bond forms between the two young men, which causes discomfort for family and friends, as well as for Jason and Liam, themselves. And added to the challenge of two previously “straight” men falling into a same-sex love, are the complications that arise from the abundance of secrets Liam holds with regard to a past family tragedy. The fledgling passion between the men seems bound to fade away into the darkness from which it emerged.


Jason, however, is inexplicably called to rescue his hero in return, by delving into Liam’s shady past and uncovering the mystery that compels the older man to act as the college town’s selfless savior.


The Art of Hero Worship takes the reader on a voyage from the dark and chilling chaos that accompanies a mass shooting to the thrill of an unexpected and sensual romance. 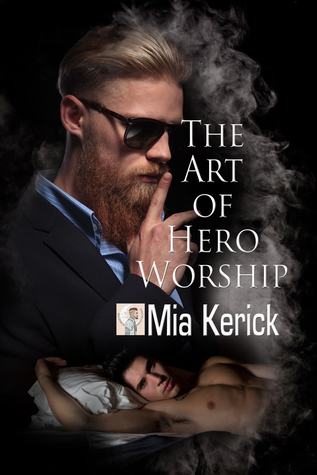 I received an ARC of The Art of Hero Worship by Mia Kerick  in exchange for an honest review.
There are some books you automatically love and this is one of them. The first chapter in The Art of Hero Worship is absolutely breathtaking. The pain and fear you can feel as if your actually there. I was completely enraptured with this stunning story and how people react in the aftermath of such a situation.
Jase and Liam. I have never read a romance where two people are more perfectly suited to each other as they are here. I was a little upset with Jason's actions the summer after the event had happened. However, he had gone through a trauma and a major lifestyle change so i can excuse him this one time.
Liam is the ultimate sweetheart with his forgiveness and protectiveness. The Art of Hero Worship is a truly amazing read although i would have liked to have had an epilogue so we can see them a few years later. I would also have liked to have seen Karma working her magic on Ginny's best friend after the way she acted in the cafe.

I think The Art of Hero Worship will definitely remain one of my favourite books of 2016 and I can't recumbent it enough.
Posted by Unknown at Friday, February 05, 2016

Email ThisBlogThis!Share to TwitterShare to FacebookShare to Pinterest
Labels: Mia Kerick, The Art of Hero Worship