What if a man could command you to do anything and you couldn’t make yourself say no?

Some people go through life without encountering evil. Zorie is not one of the lucky ones. As a teenager, she escaped a kidnapper. Now she’s stronger, smarter, and she avoids the wolves.

Until she meets Reuben and her avoidance strategy is chaff in the wind. He’s a collector and a mesmer, with the ability to control certain women at will. Zorie is to be his remote-controlled plaything.
She's been collected.

Two men are the key to Zorie freeing herself from Reuben.
Grimm Heller’s reasons are hidden in his past and his soul.
Mister Black’s reasons are simpler. He wants her for his own to make her into a weapon.

No matter which way she turns, is she simply choosing a different evil? 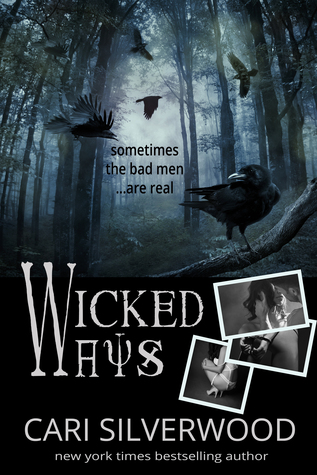 I received a copy of Wicked Ways (Dark Hearts #1) by Cari Silverwood in exchange for an honest review.
I adored this book. A woman forced to submit to men using mind control. This is a fantastic twist on a dark romance novel. There are so many twists and turns in Wicked Ways. The sex scenes were Hot and very graphic at times with multiple partners, BDSM, and many more intense situations. There were a few scenes where i had no idea how to react, they were a first for me, very dark and cruel yet somehow enticing.
Zoire, our heroine is a a good girl in many ways, well educated a little uninteresting and common to begin with, until she meets Reuben. Reuben is a mesmer, a man who can control certain women and make them do whatever he wants them to. It's a terrifying thought and really there is a lotabout him you shouldn't like. However, Cari Silverwood's writing completely captures you and alters you imaging of eight and wrong.

A very intense read but well worth it.
Posted by Unknown at Saturday, February 06, 2016